A new set of field tests were conducted inside the framework of GAVIOTA project to identify the maturity status of the solutions, to determine its tentative application in real operations, and the points of improvement. 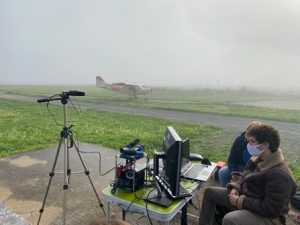 In each test, the GAVIOTA solution was deployed and operated using different configurations while a general aviation aircraft and RPAS vehicles were instructed to perform different flights around the detection area.

After the tests it was concluded that the hardware components and its architecture were suitable for the project objective, except for the audio sensors which should be changed by another with better sensibility with the aim to increase the audible spectrum, improving the capacity of detection.

In reference to the software, it is concluded that aircraft detection through visual sensors is a valid approach for aircraft flying at low levels and beyond visual line of sight, but always dependent on the meteorological conditions. The use of single board computers allowed to use Deep Learning techniques and convolutional neuronal networks to deploy a solid basis over which detection algorithms may be applied.

Aircraft detected through the algorithm

The project is being carried out by a consortium formed by the aeronautical engineering companies Pildo Labs Galaica, Pildo Labs, and the Advanced Center for Aerospace Technologies (FADA-CATEC).

GAViOTA project is framed into the call ‘Retos de Colaboración 2017’ of the Spanish state program for research, development and innovation oriented to society challenges, within the framework of the State Plan for Scientific and Technical Research and Innovation, 2013-2016.